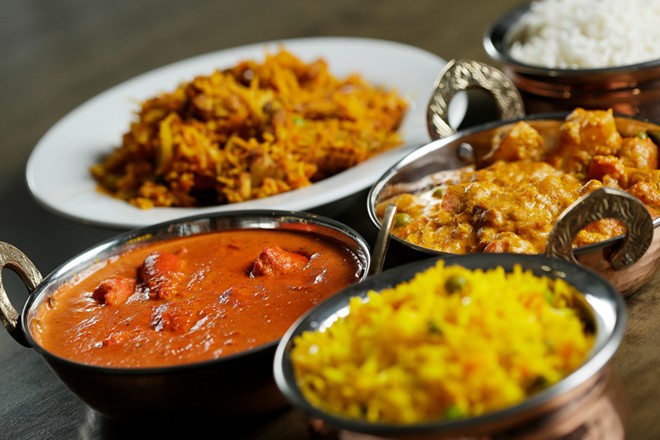 Tracing Curry’s Origins Across Continents, Cultures, and History, and Finding It in Many Local Restaurants | Food News | Spokane | Interior of the Pacific Northwest

Aasking someone how they like curry is a bit like, “Where do you come from?” The answer varies widely and is often based on where a person was born, lived, or currently lives.

For a very long time, I thought curry came from the grocery store in a box that, when opened, gave off an earthy scent and a little whiff of what looked like golden flour. Now I know that freshness is the epitome of flavor in dishes like the crisp, lemony Thai green curry and the fiery, sweet and sour Indian vindaloo.

I also know that curry comes in many forms. Even so, the appearance of curry dishes on Japanese menus was unexpected and inspired this exploration of what curry is and is not.

“Some people think curry is just any kind of sauce [like with] onion, tomato, ginger, garlic,” says Deepika Dhawan, who opened India House Post Falls with her husband Manoj Kumar in 2020. The couple also own Karma Indian Cuisine in Moscow, Idaho, and will soon be opening Karma Cuisine & Lounge at 2606 N Monroe St. in Spokane in the former Hedge House restaurant building, which more recently housed the Hi-Revs Bar.

The perception of curry as a sauce could be a persistent mistranslation. In his definitive culinary history, Curry: a story of cooks and conquerors, Lizzie Collingham traces the word back to the 1500s when Portugal invaded India and the Portuguese interpreted the words referring to the stews and sauces eaten by the locals as “curry”. Other experts, however, claim that curry is a South Indian word, Karirelating to black pepper.

Either way, curry is more about the spice than the sauce, says Dhawan. Cinnamon, cloves, cumin, fennel, fenugreek, mustard, pepper and turmeric are commonly used.

At India House, for example, malai methi ($15-$16) with fenugreek is warm and slightly sweet, while vegetarian chana masala ($14) incorporates sweet chiles into a tomato-based sauce to balance out the hearty chickpeas.

Like most traditions, the cuisine varies by region. Dhawan was raised in the Punjabi state of Jalandhar in northern India and cooks with lots of cumin seeds or Jeera. Mustard is more common in South Indian cuisine, she says.

Also unique to North India is the term garam masala against curry, which Dhawan uses on its restaurant menus because the public is used to the word, she said.

“Garam masala is the backbone of our diet,” says Dhawan.

Even as she continues to cook traditional North Indian dishes, Dhawan is a proponent of experimentation in the kitchen. Cooking is an art form, she says.

“I think you can give yourself the opportunity to play with everything.”

Llook at a map of indiait is easy to see how ingredients and culinary traditions may have traveled west, to the Middle East and Africa, for example, north to China and east to Bangladesh, which serve all dishes called or including curry.

Throughout Southeast Asia, which includes Indonesia, Malaysia, the Philippines, Thailand and Vietnam, curry generally refers to a thick, moist mixture of shrimp paste, herbs, herbs and spices (as opposed to dry spice blends in Indian cuisine).

At Thai Kitchen, Benji Hall has been making everything from scratch since 1990, when she and her husband, Paul, opened their Spokane Valley restaurant. The menu features vibrant and flavorful dishes reflecting Hall’s upbringing in central Thailand, particularly in Bangkok, where she learned to cook from her mother and by tasting local dishes.

“[Benji] cooks based on how things taste, rather than exact measurements,” says daughter Melissa Hall, who manages the restaurant’s social media and is also helping with a renovation for on-site dining resumption (Thai Kitchen is currently take-out only) .

Red curry ($16-$18), for example, tastes salty, sweet and creamy, says Hall. It starts with a paste of chili, garlic, lemongrass, and kaffir lime leaves, along with coriander, cardamom, and cumin seeds. Along with a choice of protein, Thai Kitchen’s red curry dish features bamboo strips, bell peppers, peas and basil leaves in a rich coconut broth.

Green curry ($16-$18) is spicier than other varieties due to the fresh chilies, says Hall, noting that the curry paste for this dish contains garlic, basil, lemongrass, shallots , ginger, coriander seeds, cumin, cardamom and galangal, which looks like ginger but is pine and citrus.

“Thai curry, and Thai food in general, is all about the little things,” says Hall, who has been cooking alongside her mother for more than 10 years.

“We help each other cook the curries, whether I start the dish or she does it,” she adds. “Finally, we test the taste to make sure it’s perfect.”

AAmerican diners are perhaps the most familiar with Thai and Indian curries, others still exist. Doro wat, which you can find at the Queen of Sheba restaurant, for example, is sometimes called Ethiopian curry because of its fragrant sauce and spices. Singapore noodles include curry flavors and can be found locally at PF Chang’s.

The British inadvertently introduced curry to Europe and the rest of the world. After the Portuguese, French and Dutch invasions of India, the British stepped in, eventually ruling India and embracing many Indian culinary traditions to the fullest.

Over the centuries, the British have adapted curry, notably through the manufacture of an easy-to-use curry powder, similar to what is sold in tins marked “curry”. European currywurst is a direct descendant of this process, which you can find locally at Alpine Deli, Das Stein Haus or Crown & Thistle Pub.

Where the Brits have gone, curry has gone too, including all over Asia, so look for curry dishes at places like Vietnamese restaurant Le Brothers or Asian restaurant Vina. In Japan, curry is often served in a popular dish called kare raisu or curry rice.

“For me, Japanese curry is comfort food,” says Viljo Basso, who started Syringa Japanese Café and Sushi Bar in Coeur d’Alene with his wife, Autumn, in 2007.

When I share my curry surprise on Syringa’s menu, he says it happens all the time and is happy to recommend the dish, especially in cold weather.

Basso’s rice curry ($14) starts with onions cooked until they crumble. He adds potatoes, carrots and “roux cubes”, which look like bullion and include flour to thicken the sauce. Variations can include meat, but also stuffed mushrooms.

“I always tell people it’s more like gravy” than other types of curry dishes, Basso says. ♦