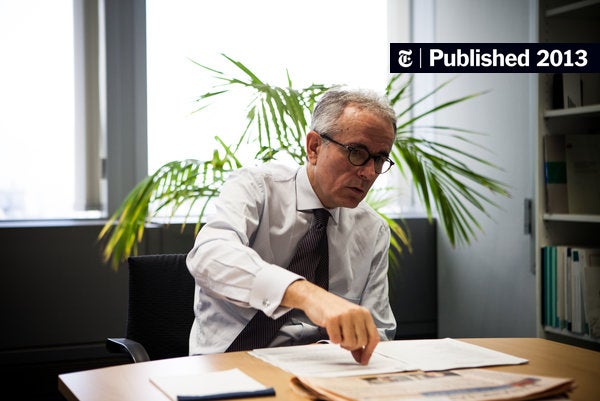 From the window of Mr. Angeloni’s downtown office, the future headquarters of the European Central Bank looms on Frankfurt’s skyline. The tall skyscraper, surrounded by cranes, testifies to the growing role of the central bank as a global power.

The heaviness of some banks is a symptom of technological advances that have led to nano-speed trading and the use of complex computer algorithms that guide investment decisions, Angeloni said. While he expressed doubts about the usefulness of separating the investment and retail activities of banks, as advocated by many on both sides of the Atlantic, he nevertheless suggested that some banks had become too complex for their own benefit or that of society. Perhaps ominously for Banks, the silver cufflinks on his monogrammed shirt were shaped like bears.

“CEOs, they look superhuman, but, in fact, very often they don’t know what’s going on, and they don’t understand because it’s very, very complicated,” Angeloni said.

Mr. Angeloni is a citizen of the world. Born in post-war Milan, Italy, he studied economics at Bocconi University in Milan with Mario Monti, the respected technocrat who headed Italy’s previous government. At the University of Pennsylvania, where Mr. Angeloni earned his Ph.D., he studied macroeconomics under Robert J. Shiller. “He gave me an ‘A’,” Angeloni joked last Tuesday, the morning after his former professor was named a Nobel laureate in economics.

But Mr Angeloni’s career has extended beyond traditional economic research, to include diplomatic work for the Italian Treasury, where he also headed the state-run export credit agency. He cites Kant and Pirandello in his published works.

Today, Mr. Angeloni is one of the most versatile lieutenants of Mario Draghi, the President of the European Central Bank. The immediate task is to prepare for the establishment of a quasi-independent supervisory arm of the central bank, which will have its own president.