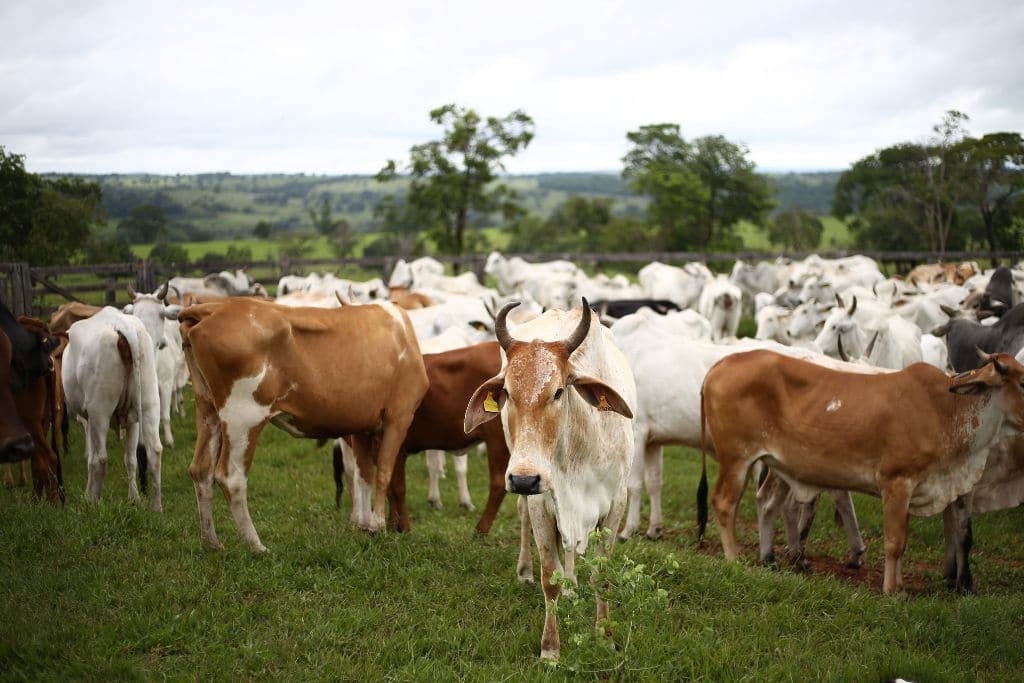 Meat consumption and climate change: Western countries must reduce by 75%

According a new study published by researchers from the German University of Bonn, rich countries must drastically reduce their meat consumption in order to keep global climate goals within reach and ensure future food security. This is the latest in a series of recent research demonstrating the massive environmental pressure caused by large-scale farming. So what exactly is the link between meat consumption and climate change, and what can we do about it?

In May 2022, approximately 140 million tons of meat have already been consumed around the world – a number that is increasing minute by minute and at an astonishing speed. At the end of each year, global meat consumption amounts to around 350 million tonnes; double the amount of 1988 and the trend shows no signs of slowing down. At the same time, evidence of the significant contribution of the meat and dairy industry to climate change is mounting: according to the Food and Agriculture Organization of the United Nations, our global food system accounted for more than a third of global greenhouse gas emissions in 2021and around half of them are attributed to livestock only. In reality, twenty of the world’s largest producers of meat and milk alone emit more greenhouse gases than entire industrialized countries such as Germany, France or Great Britain, recent report published by Friends of the Earth showed this.

As a result, voices calling for reduced emissions from animal agriculture are increasingly heard. More recently, Martin Parlasca and Matin Qaim of the University of Bonn reviewed the current state of research on the environmental, health and economic effects of meat consumption, concluding that rich countries must reduce their meat consumption. at least 75%. Americans in the United States, the biggest meat eaters in the world, currently consume about 124 kilograms of meat per person per yearEuropeans around 80 kilograms – both a multiple of dietary recommendations. “If all humans ate as much meat as Europeans or North Americans”, Qaim declares, “we would certainly miss the international climate targets and many ecosystems would collapse”. For comparison, in some African countries, people consume less than 20 kg of meat per year, the amount recommended for rich countries by the authors of the study.

How does livestock affect climate change?

But what makes farming so harmful to the environment? On the one hand, ruminants such as cows emit methane and are thus the direct cause of climate change. Beyond that, the large ecological footprint of animal products is also largely due to the fact that their production is highly inefficient in terms of resource use. The production of meat and milk uses large amounts of energy, water and land, the majority of which is used to grow animal feed such as corn and soybeans. The problem is that only a small portion of the calories consumed by livestock are turned into meat or dairy products for human consumption. Consequently, livestock farming occupies 83% of the world’s agricultural land, but provides only 18% of global calories. The production of milk or milk products therefore requires a much larger area to feed a number of people than plant foods – think of it as food taking a detour from the animal and losing much of its nutritional value in the process. This is particularly problematic given the growing world population and its growing food needs; Currently, half of the grain and 90% of the soybeans produced in the world are used as animal feed, although they could feed many more people if eaten directly by humans. It is believed that as a resultif we are to maintain our current eating habits, there could be more people on our planet than can already be fed by 2050.

In addition to this, the huge demand for land from animal agriculture puts great pressure on natural ecosystems. To make room for cattle ranching and the large-scale cultivation of animal feed, large tracts of land are being cleared, which means deforestation and then planting monocultures – often in some of the most valuable areas. and the world’s most vulnerable, such as the Amazon. By displacing native plants and species, livestock farming has a negative impact on biodiversity worldwide; as WWF Already reported in 2017, meat-based diets can be linked to 60% of global biodiversity loss. This further compounds the effects of global warming, as the loss of biodiversity weakens the resilience of the natural environment and its ability to mitigate the effects of climate change.

Plant-based food for the planet?

So how can we reduce the environmental impacts of our diets? Drastically reduce meat consumption in the West, as Parlasca and Qaim suggest, is the direct answer. Replacing 80% of animal products in our diet with plant products would be even better, a recent Finnish study suggests. In this way, the climate impacts of European diets could be reduced by up to 75% – compared to a 60% reduction achieved by rationing our meat consumption alone. Finnish researchers determined the environmental impacts of an omnivorous diet compared to diets in which all animal products were replaced with plant-based or so-called novel foods – think cultured meat and milk in the laboratory, to insects or algae – and in doing so attempted to model the ultimate climate-friendly diet. They discovered that by using new foods, the environmental impacts of our diets could be reduced by more than 80%. Still, they see limited potential in this type of diet, as unfamiliar new foods might be unappealing to many. And getting people to incorporate new foods isn’t even necessary, says Rachel Mazac, one of the study’s authors. Considering diets that simply cut back on meat and dairy were nearly as climate-friendly, she says, “the real take-home message is that we have food pathways to follow.”

That doesn’t mean the whole world has to go vegan, though. Especially in poorer regions, growing and harvesting vegetables and pulses is not always feasible, so animal products will remain an important part of local diets. However, in these regions, meat consumption is already very moderate – reducing the environmental impacts of our food systems by reducing the consumption of meat and dairy products therefore belongs to industrialized countries, because Parlasca and Qaim focus on. So far, with meat consumption increasing globally and leveling off in Europe, there is no sign of such efforts. One way to change this could be the introduction of taxes on products of animal origin, as has been called for in several European countries such as Denmark or Sweden and which is currently the subject of discussions in Germany. According to a study 2016 led by a team from the University of Oxford, a surcharge of 40% on beef and 20% on milk would be needed across the world to account for the damage that the production of these foods causes through change climatic. Other animal products such as lamb, chicken, pork and eggs would require a tax of 15%, 8.5%, 7% and 5%, respectively. Such price increases, the team around renowned food scientist Marco Springmann has calculated, have the potential to drastically reduce consumption. Beef consumption, they estimate, would drop by up to 13%.

At the same time, such taxes would require redirecting subsidies from animal agriculture to the production of fruits and vegetables as well as alternative plant proteins, as Springmann argues. Currently, animal agriculture is heavily subsidized in Western countries, making possible disproportionately low prices for animal products while allowing citizens to indirectly co-finance the climate crisis. In the United States, for example, animal production is subsidized up to 38 billion US dollars per year, while fruits and vegetables receive only $17 million, or 0.04% of the former. If these subsidies were increased and combined with adequate taxes and payments to ensure the poorest could afford healthy diets, the Oxford researchers found that greenhouse gas emissions could be reduced by up to 1 billion tons per year. This is equivalent to the annual emissions of the global aviation industry.

The scientific consensus is clear: if we are to mitigate the magnitude of global warming and ensure future food security, the ways we eat and produce food must change. While the prospect of making our food systems more sustainable can be daunting, there is also a silver lining here: changing the way we eat holds enormous potential to make a real dent in the fight against climate change – and one relatively easy way that holds public health co-benefits. Yes, changing our eating habits can involve small personal sacrifices, but it’s also encouraging that our ability to slow global warming doesn’t depend solely on advanced technology or scientific knowledge. Political and economic action will be necessary for the large-scale changes that are ultimately needed, but until then the power of individual action should not be underestimated; like a study undertaken by international engineering firm Arup recently showed for the first time that individuals “have a primary influence on 25-27% of the emissions savings needed by 2030 to avoid ecological collapse” – and it is a minimum number, because individual action is also politically necessary to drive change in business and government, where the remaining 75% of emissions savings are decided. Individual action has never been more urgent than it is today; the study also concludes that “citizen and community efforts are particularly important between now and 2030”, as we are currently in the midst of a pivotal decade of climate action. So the next time you opt for that oat milk or participate in that climate strike, no matter how insignificant, know that in fact, you are making a difference.