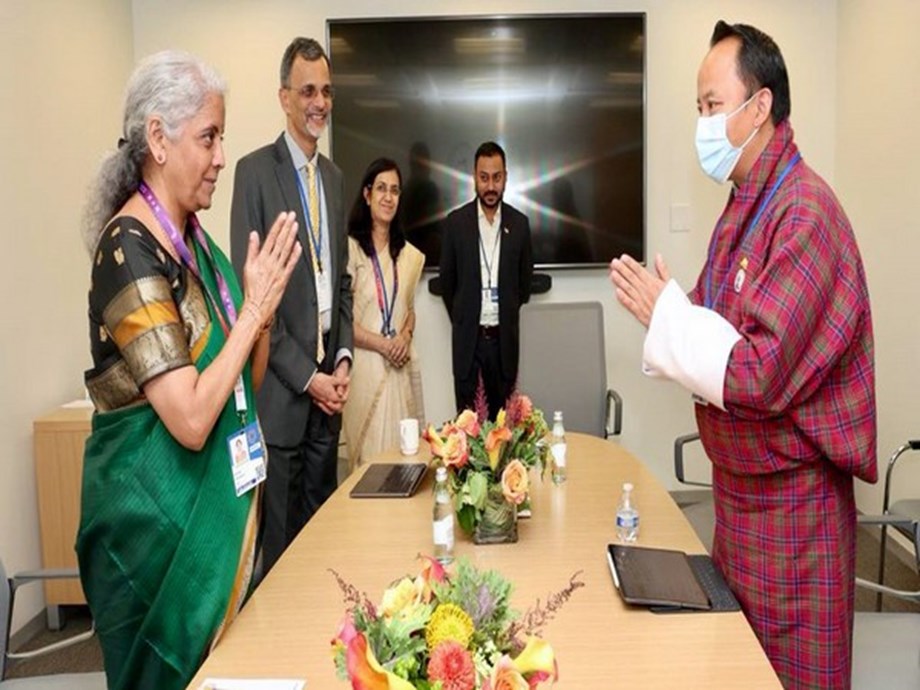 Union Finance Minister Nirmala Sitharaman met her Bhutanese counterpart Lyonpo Namgay Tshering in Washington on Wednesday and expressed India’s desire to expand bilateral cooperation between the two countries, including hydropower, COVID-19 help, among other issues. Sitharaman, who is on an official visit to the United States, held talks with Minister Tshering on the sidelines of the annual meetings of the Boards of Governors of the International Monetary Fund (IMF) and the World Bank Group (WBG).

“Union Finance Minister Smt. @nsitharaman meets with Mr. Lyonpo Namgay Tshering @BhutanFinance, Bhutan’s Finance Minister, today on the sidelines of the #IMF and World Bank Annual Meetings, in #Washington DC,” the Treasury Department tweeted. “The Minister of Foreign Affairs said that India is looking forward to expanding the bilateral cooperation between the two countries to new and emerging areas such as #space, #digital technologies, financial sector, health and higher education,” the ministry added.

Sitharaman reiterated that India is keen to move forward and “further deepen bilateral relations between India and Bhutan for the development and welfare of our people”. Bhutan’s finance minister, on his part, thanked the Indian government for helping to implement its 12th Five-Year Plan and the additional $200 million currency swap agreement.

“Lyonpo Namgay Tshering @BhutanFinance expressed his gratitude to the Government of India for its assistance in implementing its 12th Five-Year Plan and the additional $200m Currency Swap Agreement. He also thanked India for the rollout of #BhimUPI and #RuPay already done in Bhutan,” the ministry said. . On Wednesday, Sitharaman held back-to-back bilateral talks with global finance ministers and heads of major international organizations in Washington DC on topics centered on important economic issues.

Sitharaman is on an official visit to the United States to attend the IMF and World Bank annual meetings, the G20 Finance Ministers and Central Bank Governors (FMCBG) meetings. The Minister of Finance holds bilateral meetings with a number of countries around the world. She also organizes individual interviews with leaders and officials from the OECD, the European Commission and the UNDP.

On the sidelines of the IMF-WB, Sitharaman met on Tuesday with ministers from Egypt, Bhutan, the Netherlands, Saudi Arabia and South Korea. She also met with OECD Secretary General Mathias Cormann and FATF President Raja Kumar. During the last part of the visit, the Union Finance Minister will participate in roundtables with USIBC and USISPF on the themes of “Enhancing Investment and Innovation in the India-State Corridor United” and “Investing in India’s Digital Revolution”.

These meetings with leading business leaders and investors aim to highlight India’s policy priorities and deliberate on measures to facilitate foreign investment by showcasing India’s attractiveness by as an investment destination. (ANI)

(This story has not been edited by the Devdiscourse team and is auto-generated from a syndicated feed.)