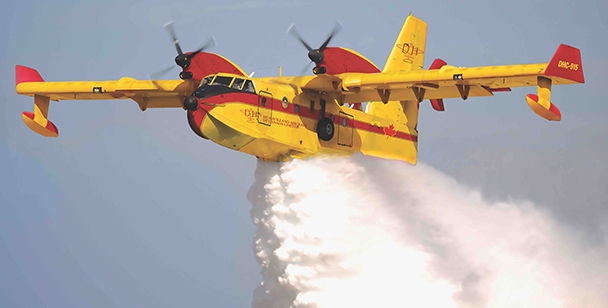 As drought and unprecedented heat waves lead to an upsurge in wildfires in Western Europe, attention is being drawn to the resources available to help firefighters, particularly fixed-wing aircraft.

The European Union has budgeted around €900 million in 2021 for civil protection, crisis prevention and response, and expects this amount to increase.

Currently, the EU is coordinating and funding the deployment of 12 fixed-wing firefighting aircraft and one helicopter pooled by EU countries. Aid is expected to increase due to climate change and more frequent forest fires, Reuters reports, the EU plans to buy crisis response aircraft, EU Commissioner for Crisis Management Janez Lenarcic said.

“These planes will technically be purchased by member states but they will be 100% funded by the European Union,” Lenarcic said.

Lenarcic declined to name the companies involved because the contracts have yet to be signed, but said there are plans to restart production of amphibious aircraft that collect water to put out fires.

In a March 31, 2022 press release, De Havilland Aircraft of Canada announced a new twin-engine water scoop aircraft, the DHC-515, formerly known as the CL-515. The CL-515 was first announced in December 2018, but actual production was delayed.

De Havilland wrote that they “have launched the De Havilland DHC-515 Firefighter program, which will involve negotiating contracts with our European customers and ramping up production,” said Brian Chafe, Chairman and CEO of De Havilland. Canada.

“European customers have signed letters of intent to purchase the first 22 aircraft pending the positive outcome of government-to-government negotiations through the Government of Canada’s contracting agency, the Canadian Commercial Corporation,” the report said. communicated. “De Havilland Canada anticipates the first deliveries of the DHC-515 by mid-decade, with additional aircraft deliveries at the end of the decade, offering other customers the opportunity to renew existing fleets or proceed with new acquisition opportunities at that time. time.

“Final assembly of the aircraft will take place in Calgary, Alberta, where work is currently taking place on the CL-215 and CL-415 aircraft. It is expected that more than 500 people will need to be recruited over the next few years to carry out this program.

Meanwhile, there may be disagreement in Portugal over what kind of firefighting plane to buy. The resident of Portugal reports that the Council of Ministers has approved a resolution for the purchase of 12 helicopters and two “heavy” amphibious aircraft. The report indicates that the country intends to spend a total of 60 million euros to purchase two CL-415s which are no longer in production. They are most likely considering the soon to be manufactured DCH-515.

The resolution of the Council of Ministers which approved the purchase of the two scoopers, according to the Portuguese resident, “chosen to finance the operation with PRR money from Brussels and money available through the European mechanism of civil protection”.

The resident of Portugal wrote that João Marques, president of the Portuguese volunteer firefighters association, recommends that they spend the money instead on Fire Boss single-engine tankers which he says cost around 3 million euros. each.

Thanks and hats off to Gerald.