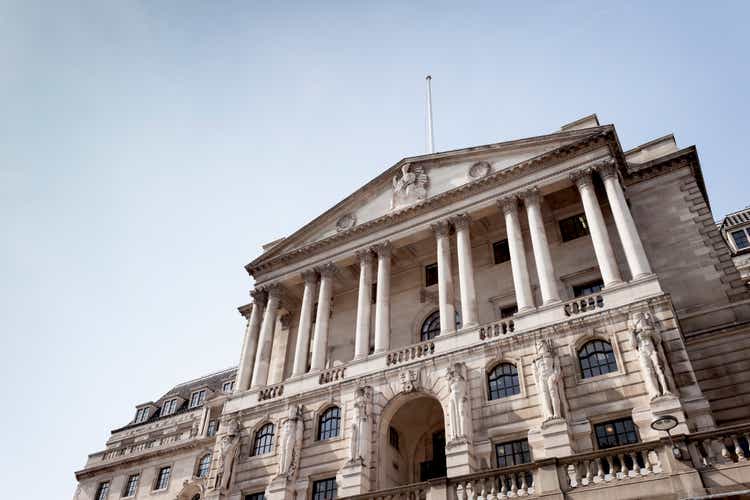 The Bank of England (BOE) raised its benchmark interest rate by 25 basis points last week to 1.0%. This decision was widely expected, but what happens next is in the air. As with most global economies, the UK economy is being pulled in different directions, with inflation soaring and growth slowing.

What should a central bank do in the face of this dilemma? Unfortunately, there are no right answers. Raising interest rates to tackle high inflation will aggravate the slowdown in growth; easing monetary policy conditions to support growth also means letting inflation rise too high for too long.

The growth-inflation dilemma is most intense in the UK

This dilemma is more intense in the UK than in Europe or the US, with higher inflation – and more likely to remain so. One of the main reasons is that regulated energy prices in the UK are reset in April and October. April’s increase was over 50% and another big reset is likely in October. The BOE’s forecast reflects this trajectory – they now have inflation peaking at double digits in the fourth quarter – later and higher than expected in other major economies.

At the same time, the slowdown in growth is more apparent in the UK, which is also reflected in the BOE forecast. The central bank now expects the UK economy to contract in 2023 and expand only slightly in 2024. As with the inflation forecast, UK-specific elements in the growth forecast make the slowdown to come more extreme than is likely elsewhere. Brexit, for example, will continue to weigh on UK trade, dragging down growth.

But the UK is not alone in facing this challenge, even if it faces the most pronounced version. Our forecasts for the United States and the Eurozone show slower growth in 2022, although inflation remains well above target. This will make the BOE’s response an interesting case study for what may be happening elsewhere in the coming quarters.

We don’t know what that answer will be. Of the nine members of the BOE’s monetary policy committee, three wanted to raise rates by 50 basis points last week, while two wanted to eliminate language from the statement suggesting future rate hikes are likely. Such deep divisions within a central bank’s governing body are unusual, but it may be a taste of things to come elsewhere.

For now, the U.S. Federal Open Market Committee (FOMC) is unanimous in expecting policy tightening, but we expect that consensus to unravel later this year as evidence of slower growth accumulate. The more hawkish members will want rates to keep rising until inflation drops significantly, while the more dovish members will react more quickly to slower growth. The same goes for the European Central Bank (ECB): several members seem keen to go up as early as July, while others are much more cautious. This gap will widen as the year progresses.

Splitting the Difference: Growth and Inflation

We expect the three central banks to try to split the difference when setting policy in such a difficult time. The BOE should continue to rise – it’s just too much to ask of a central bank to keep rates this low with inflation approaching 10%. We see UK rates peaking at 2.0%.

The ECB looks likely to move rates at least into positive territory, but lower inflation makes the need for higher rates less intense; 0.50% is a likely ceiling this year. US growth momentum is much stronger than in the two European economies, so we expect the Fed to be more aggressive. We expect the pace of increases to slow in 2022, leaving the policy rate at around 2.5% by the end of the year.

The main message from the BOE is that volatile economic conditions will likely require policy flexibility. In an environment that does not present good responses to the challenge of growth and inflation, central banks must be agile, just like investors.

The opinions expressed herein do not constitute research, investment advice or trading recommendations and do not necessarily represent the opinions of all of AB’s portfolio management teams. Views are subject to change over time.

Editor’s note: The summary bullet points for this article were chosen by the Seeking Alpha editors.

2022-05-12
Previous Post: Flying to Europe? These are the 15 countries where face masks are still mandatory on board flights
Next Post: Scott Bader Standardizes with Infor, Driving Global Cloud Upgrade Across Three Continents