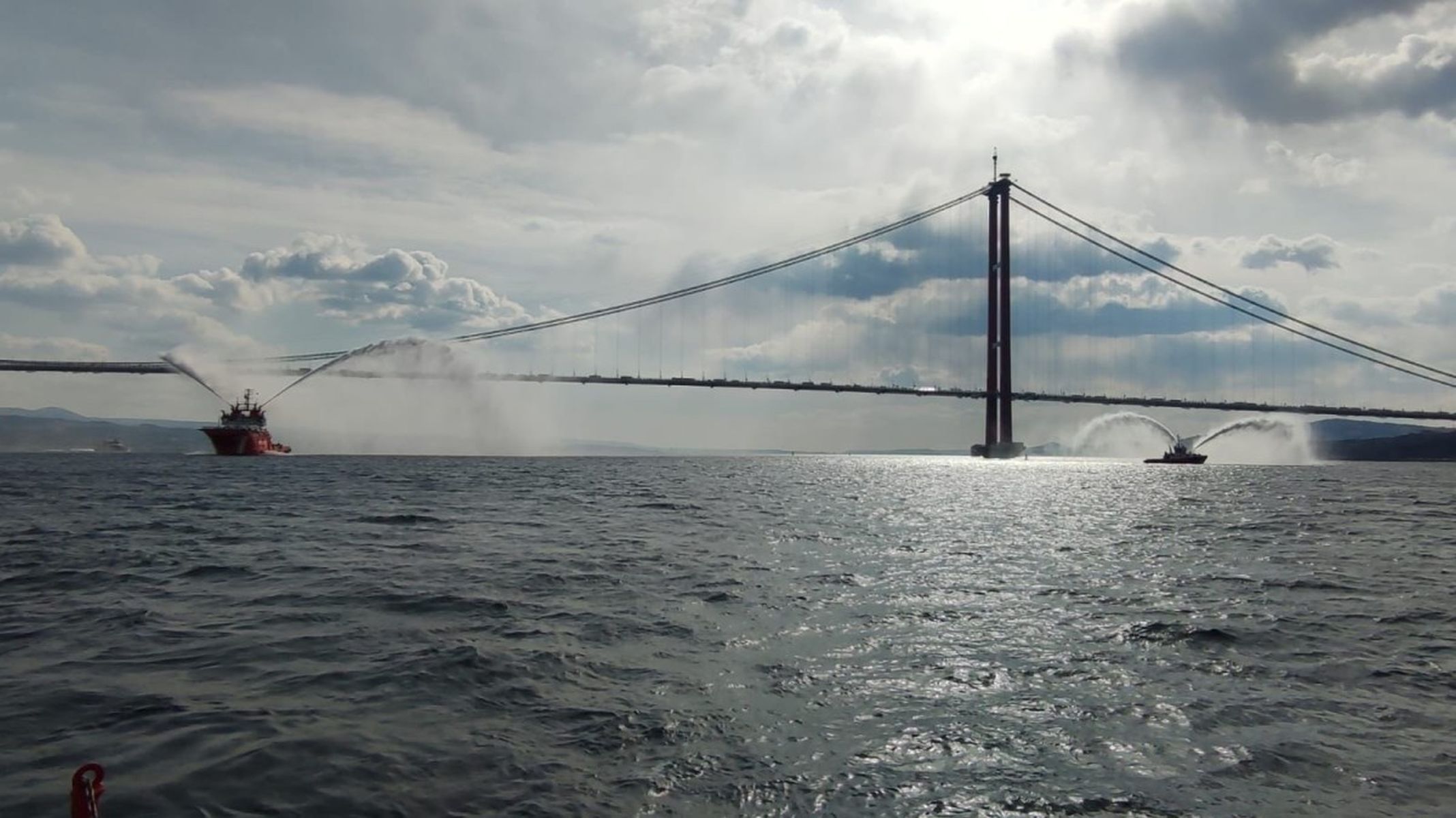 Between the 1915 Çanakkale Bridge and Two Continents Now 6 Minutes!

The Project of the Century 1915 Çanakkale Bridge was inaugurated in the presence of President Recep Tayyip Erdoğan. Minister of Transport and Infrastructure, Adil Karaismailoğlu, stressing that they have further clarified Turkey’s new target photo, said: “As a project of bests, firsts and records, one of the landmarks of our country meets his nation today. There’s a big picture in the middle, the ‘Great and Powerful Turkey’ picture,” he said.

President Recep Tayyip Erdoğan attended the opening ceremony of the 1915 Çanakkale Bridge and Malkara-Çanakkale Highway. Speaking at the opening, Transport and Infrastructure Minister Adil Karaismailoğlu said: “In the unique atmosphere of this spiritual day when we celebrate the 107th anniversary of the glorious resistance of our War of Independence, the first front of our war of independence, the 1915th anniversary of the naval victory of Çanakkale, in which the power of the Turks was rediscovered all over the world, the most important part of the history of our Republic. We are proud and happy to present one of the great transportation projects, Malkara-Çanakkale Highway and Çanakkale Bridge, serving our nation and the whole world.

Stressing that with the project, Turkey is set to become one of the largest in the world in terms of investment, production, export and employment, Karaismailoğlu said the 1915 Çanakkale Bridge is a masterpiece that will suit the memory of Çanakkale epic and seal the glorious history like a monument.

Transport Minister Karaismailoğlu said, “The architectural design and technical features of our bridge carry the epic of the century to today” and continued his speech as follows:

“As a project of bests, firsts and records, one of the landmarks of our country is meeting its people today. There is a big image in the middle, the image ‘Great and Mighty Turkey”. Under your leadership, all the investments that have been made and all the works that have come to light are brushstrokes on this painting one by one. With the commissioning of our highway and our bridge, the sectors transport, production, industry, trade, tourism and services of Western Anatolia, the Aegean and even the Western Mediterranean region, as well as Thrace, will be revitalized. will contribute to the unbroken trade route from Beijing to London.”

THE ROAD WILL BE SHORTENED BY 40 KILOMETERS, THE TRANSITION TIME WILL BE 6 MINUTES

Pointing out that the highway has been shortened by 40 kilometers compared to the current route, Karaismailoğlu said: “The transit time through the Dardanelles, which used to take hours by ferry, is now only 6 minutes… Our project was completed 1.5 years ago with the outstanding success in the construction work.Even this project alone is a good example of how build-operate-transfer projects with public-private cooperation are beneficial globally.As Turkey achieves its goal of becoming a “global logistics base”, the infrastructure necessary for Turkey’s Vision 2053 is already being prepared through investments in transport and infrastructure that we have implemented as part of the transport and logistics master plan, which requires having a vision, unlike the daily superficial political discussions.Our objective is to contribute to the competitiveness of our country and to increase the quality of life of society; It is a safe, economical, comfortable, ecological, uninterrupted, balanced, intelligent and sustainable transport system.

WE HAVE CLEARED OUR TARGET’S NEW TURKEY PHOTO

Expressing that they have further clarified Turkey’s new targeted photo, Transport and Infrastructure Minister Karaismailoğlu made the following assessments;

“Holy Focused Development; We have an efficient and ambitious new process shaped by the dynamics of mobility, digitalization and logistics, aiming to integrate the world into this geography, and we are successfully managing this process under your leadership in all modes of transport. The 1915 Çanakkale Bridge will inspire new technical breakthroughs both in our country and around the world.

2022-03-19
Previous Post: Polio alerts issued for countries in Asia and Eastern Europe — Precision vaccinations
Next Post: Rising star painter Joy Labinjo has shows on two continents. She told us how she gets there